First of all Tony asked us to think of an important character from childhood that we could identify with or sparked something within us. He asked us to write a short statement about the character from the point of view of the character. This was a great exercise to help us get into the head of a different person, and it was interesting to see which character everyone picked.

To those members and guests who weren’t able to come to the workshop: why not try it now?

We went on to discuss culturally shared characters from classic myths, with Icarus being the central character of our discussion.  Because everyone has an idea of Icarus and his story, it makes characterising him a little easier, which is great for a beginner. We didn’t have to worry about the theme or fictional world because that’s already culturally established. 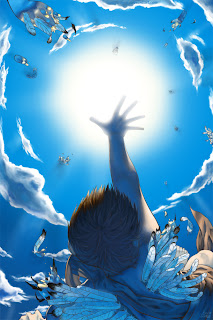 We then worked for a 10 minute period in which we wrote out a short monologue from the pov of a famous character from history, fiction or legend, but set in the modern day. Most of us picked up the Icarus character, but there were others as well; such as Medusa, Charon and the BFG.

When writing monologues it’s important that the situation is easy for the audience to visualise and to remember that it will be acted. There will be minimal props, but a few key props could be incorporated.

Your audience will more readily engage with the performance if the characters have empathic qualities. If your audience feels like they can understand the character, having been through a similar experience themselves, you will have a more attentive and receptive audience. But careful not to bore them by giving them too much, don’t spoon feed them; always keep ahead of your audience.

We had a great time, and there’s even a chance we might work with some actors to bring our first monologue experiments to the stage.

Keep your specs peeled for further info about this.