(Other People's) Thoughts on Story Structure

This is something I came across when reading about story structure a while back, that I thought I'd share. I think story structure is one of the harder things to talk about because it diminishes the role of the writer a little bit. It's the man behind the curtain, it's admitting the presence of a method, it contradicts the lovely myth that stories gush out in a moment of pure creative genius.

So when I read articles about 'what makes a great story' my default position is skeptical at best and more likely I’ll react with a sense of revulsion. Surely a story-writing formula is just a recipe for formulaic stories?

That said, I want to introduce you to a concept explained by one of my favourite writers, a guy called Dan Harmon. I'm a little bit embarrassed to bring him up because Dan Harmon is not a novel writer. He is an American sitcom writer. He writes sitcoms that are not popular enough to make it to UK television. Please bear with me.

I don't hold up Harmon as an undiscovered literary diamond, I introduce him as someone who has apparently spent more time than me thinking about what makes a story. Not what makes a good story, more what our brains recognise as being a story on a very basic psychological level. That strikes me as a very good thing to have some idea about if, like me, you want to be able to tell stories.

What Dan Harmon did was attempt to come up with a simple model that could describe the mechanics of every story that had ever been told*. Whether he succeeded in that or not is a matter for you to decide, but here’s the result: 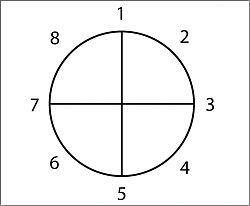 This circle is, in Harmon’s world, the secret to telling a story that another human being will recognise as a story. You’ll notice there are 8 points on the circle that correspond to the following parts of a story:
Super simplistic and not terribly instructive in its own right. However if you doubt the universality of this structure it’s worth spending some time trying to overlay it onto stories you know and see if you can spot the eight points at work. It’s quite upsetting how often it can be applied with very little stretching.

Where I think this model gets really interesting is when you consider this next aspect: 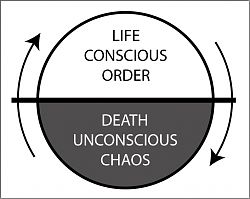 So, points 1 and 2 fall in the Life/Conscious/Order half of the circle. Things are pretty much under control here, the character is probably driving the narrative with his/her wants/needs. But when you get to point 3, things start getting weird. The darkness takes over and control is lost. Taking back control is essential to getting to point 7 so you can end the story.

Furthermore the symmetry of the circle appears to exist between points. For example, points  1 and 5 are static points in terms of the story arc (although they may include action sequences) - the narrative has not got going yet (Point 1) or reached a turning point (5). Points 2 and 6 are emotional, points 3 and 7 are transitions (your Act 2 and Act 3 respectively).

And the story circle isn’t just for the main narrative arc, it can be found in character arcs, chapter arcs, scenes, conversations. At its core it’s just a pattern that pleases the brain.

I’m not going to go any further into the nuances of Harmon’s model any more than this because I suspect anyone reading will already have made up their mind whether this way of thinking is useful to them or not. You can get the full explanation first hand here: if you’re so inclined:

Harmon discusses this more in terms of Movies and TV than books, by the way, but I think the medium is irrelevant here, it’s all stories.

My point isn’t that I think anyone should set out to write a story with this sort of model in mind – in fact I tried it and it didn’t go particularly well, I ended up with something that felt forced and…yes, formulaic.

Where I’ve found it to be very useful is when I get to the point in a story (as I almost always do) where I feel like it’s getting out of hand, like I’ve lost what it was I was trying to do and I don’t know how to fix it.

At that point, I find it really useful to apply this model to my story so far. It helps me work out what point in the story I’ve got to and where I should be headed next. It helps me decide whether it should be lead character decisions or plot machinations that should be driving events. I use it as a map for when I’m most lost and just want to throw it away. If I don’t need it then great, but it’s always nice to have a torch when the lights go out.

Thankyou for reading - I’d be really interested to hear how other writers approach story structure, whether you have any tools you use for helping build your narratives or is it pure intuition? Is it even useful to try and define a story in this way or does it just limit your options? I’d love to know your thoughts.

*I'm aware that everything Harmon is doing here is a further simplification of Joseph Campbell's Monomyth, again it's worth googling if you want to read more.

Posted by James Broomfield at 8:53 pm