It’s been exactly one year since Storyslingers formed. We met yesterday, brought WAAAY too much cake and goodies, and decorated the room in Muriel’s handmade bunting (amazingly crafted things of beauty) and Robbie’s birthday banner he designed (above) 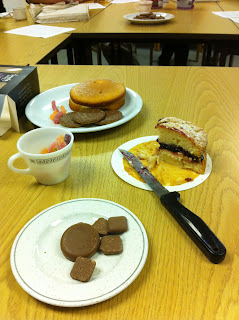 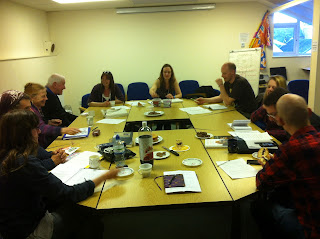 So what have we been up to during this formative first year? Here’s a round up of all the amazing things members have got up to:

1)       The first event I went to as an official Storyslinger was a Dorset Writer’s Network Marketing Your Writing Group workshop. I got loads of good ideas, some yet to be tried out.
2)       The group had our first book sale at Shaftesbury Arts Festival. We sold handmade books, bookmarks, postcards, Robbie designed some comedy cards, and we displayed publications that we’ve been in, edited or published (including Victor Canning books re-published by John Higgins).
3)       Robbie and I performed at Mere Literary Festival’s Open Mic event. I read a flash fiction and Robbie accompanied me playing backing guitar; I won a little prize. Then Robbie performed a comedy sketch that went down really well with the crowd.
4)       We had another handmade-book stall at the Mere Literary Festival.
5)       Playwright, Tony Benge came to Storyslinger HQ to lead a Writing for Performance workshop. We’re grateful to the DWN, who funded/ facilitated this workshop.
6)       John directed Beggar’s Bush, an excellent play written by Victor Canning, which went down very well, receiving good reviews and attended by at least one local celebrity.
7)       Confusingly, a new café opened up called Beggar’s Banquet (we kept calling it Beggar’s Bush!) Jennifer and I frequently met up there to talk writing and scrawl our famously slap-dash Storyslinger agendas.
8)       Simon and I visited London galleries, looking mostly at avant-garde art movements such as the Vorticists and the poetry of Ezra Pound. Inspired, we developed a Dada Poetry workshop, constructing crazy verse from random words cut out of books.
9)       Simon and I attended Bridport Open Book festival. We saw Greta Stoddart perform some poetry, and Joe Dunthorne read from Submarine, Wild Abandon and a few shorts. We sat behind PJ Harvey in the audience! Later in the festival we returned to hear our favourite author, Adam Marek, and other Bridport Prize winners talk about what the prize meant to their careers, their inspirations and writing processes. They each read excerpts from their books. Adam Marek read out a forthcoming short story, and I had a long chat with him about writing.
10)   We revived our Dada Poetry workshop for the Christmas party, this time Christmas-themed, to hilarious effect. We played a variety of literary and arts parlour games, such as literary exquisite corpse, and write-draw-write-draw.
11)   Jennifer Oliver and I gave a talk about on-line publishing as part of DWN’s Publishing Day in Dorchester.
12)   I read out a short story Intersection at a party, with a friend providing backing guitar.
13)   Colin submitted the first few chapters of his novel No More the Hero to a major competition run in conjunction with Good Housekeeping Magazine.  (and I undertook two funding bids for a literary project, both of which unsuccessful – but we’ve got to try these things. The process brought me in contact with local band Achilles, who are keen to work with us on a narrated song collaboration).
14)   Jennifer and I went on a research trip to Bath, Jennifer focused on her Steampunk novel (set in a re-imagined Victorian Bath), and me on my Arthurian novel (partially set in Post Roman Bath). We picked the brains of various historians on our visit to the museum at the Crescent.
15)   Robbie expanded his comedy organisation Cobedy to act as a network for other comedians and to market and promote the work of members (aka cobedians).
16)   Jennifer Oliver, Beth, Becky and I went to Bath Literary festival, attending the Speculative Fiction workshop. This was an excellent opportunity for networking and meeting writers.
17)   I returned to Bath Literary Festival later in the week to attend a general writing workshop and met with writers on the Bath Spa MA and PhD.
18)   Jennifer was interviewed by the notebook publishing company Paperblanks.
19)   John and Muriel attended Dorset Libraries Readers and Writers Day in Sturminster.
20)   Beth gave away 24 copies of Rebecca to mothers at Gillingham Primary School as part of World Book Night, inspiring them to take up reading and even form a book group. I gave away How I Live now to various people in various locations, and attended a World Book Night party hosted by Sherborne Literary Society.
21)   James and I attended a Bournemouth Festival of Words workshop on characterisation, which was good despite the fact we had to dredge up all sorts of significant personal history and air it to a room of people. Cathartic, maybe.
22)   Simon and I attended a Bournemouth art school “happening” – sound art performance choked full of energy, and free beer.

I had a story Beached shortlisted for a competition, and then later accepted by Kasma SF, it is published here.

My story Intersection was published by British flash fiction ezine The Pygmy Giant.

Jo completed her MA in Creative Writing at Plymouth University with a Merit.

Jo had a two week internship with SFX magazine in Bath.

I won a bursary through The Free Reads scheme to have the beginning of my novel read by The Literary Consultancy.

Jennifer finished writing the first draft of her steampunk novel.

I was offered a place on Bath Spa’s Creative Writing MA.

Becky was offered a place on a Journalism course.

Muriel and I have had stories published in a forthcoming flash fiction anthology. Polishing the Air and Automorph by Muriel, and Trapped in Nomansland by me.

Members have been proactive all year, with several ongoing projects and novels. Becky is an editor of Splendid Fred Magazine, Jennifer is working on a Steampunk novel and various short stories, Colin is writing his novel No More The Hero, I’m working on a few different novels, Robbie’s cobedy projects and films are growing and drawing in larger audiences, Beth is working on her urban fantasy novels, John has been bringing Victor Canning’s writing to new audiences, and many members have been writing some excellent short stories.

(Please inform me if I’ve missed anyone out and/or made any mistakes, I’m sure I have – I’m working from rusty memory.)

Wow! What a huge lot of stuff we’ve been doing. And I have a feeling that this next year is going to be even busier and more exciting, with new members, forthcoming events, writing conferences and literature festivals.
Posted by Zomzara at 10:27 pm